Hadron H2 Open at Itchenor © Rob O’Neill
High winds on Saturday compressed Itchenor SC’s Hadron H2 Open Meeting into a three race affair on the afternoon of Sunday 9th June.The course was shared with the International 14 fleet, starting 10 minutes ahead. The 14’s, mixed in with X boats, Swallows, Optimists and other craft in the harbour made a great spectacle. The nine H2 entrants included the current National Champion Ian Sanderson from Keyhaven. Everyone knew Ian to be fast on a windy championship sea course, but would he be fast in the shifty sea breeze on the restricted, tidal reaches of Chichester Harbour?
Well, yes actually. Extremely fast right from the get-go! 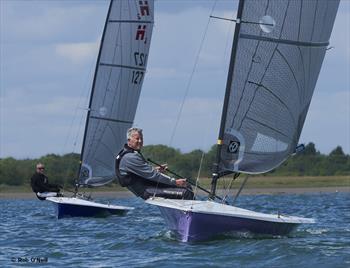 Hadron H2 Open at Itchenor © Rob O’Neill
PRO Harvey Hillary set triangular courses for the first two races. There was a beat into the tide and across the main fairway. The choice was to tack up the shallows along the East or West bank to dodge the tide, with each side having its supporters and honours largely even. The final race had an extended beat and a slalom home to finish on a line near the clubhouse. 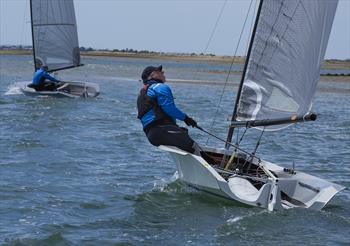 Whilst Ian Sanderson won the event, credit must go to the next three places all filled by experienced racers but who are relatively new to the H2 Class. Chris Brown, who finished second overall (declaring RORC as his home club!) – won the final race. There is a very friendly and supportive atmosphere whenever the Hadron H2’s come together, with many owners planning to support the National Championship at Arun YC, Littlehampton in early September.

The Hadron H2 Class Association thanks Itchenor SC, and especially Ryan Breach, for hosting and organising the event.